When my wife Carol told me last December that she had entered my historical novel “None Stood Taller” for the 2022 Selfies Award, which is specifically for self-published authors, I did not believe that I would have any success in this competition. After all, I only started writing books in 2017 during enforced ‘captivity’ after snapping my Achilles tendon, when I needed something no matter what it was, to keep my mind off the pain, and anyway I’m dyslexic!

I obviously could see that the book was selling very well indeed on Amazon, but I did not equate that with actual critical acclaim from the experienced judges of a serious competition such as the Selfies Award. Currently there are three categories for this Award: the latest one introduced is for Memoirs, plus there is a category for Children’s fiction and another for general Adult Fiction – it is not yet sub-divided into Crime, Historical, Romance, etc.

However, to my complete amazement, but not apparently a surprise for Carol, I was one of the finalists in the Adult section! We attended the prize-giving at the London Book Fair on 5th April as invited, and accordingly turned up at Authors HQ in the section upstairs at Olympia known as “The Writers’ Block”, a very apt name, in time for the 4.30 announcement!

It was a great shame that Jo Henry, Managing Director of BookBrunch which organises the Selfies Awards, had contacted all the shortlisted finalists the previous day because she had just tested positive for Covid-19 and therefore had to back out of leading the Awards ceremony. Her place was taken by David Roche, non-executive chair of BookBrunch also chair of the London Book Fair.

Unfortunately Peter was not the Winner of the Selfies Award 2022, but it has whetted his appetite to have another try in the future – it was a great privilege to be among all those other enthusiastic and successful self-published authors. 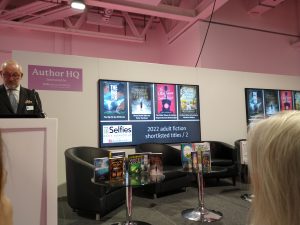 We had a very long but absolutely fascinating day trip to London from Gloucestershire, ending up with a large glass of Prosecco while we waited for our train home! 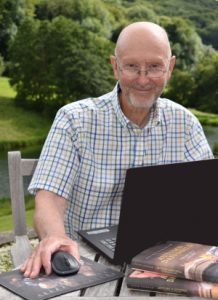 The None Stood Taller trilogy

As an avid fan of WWII novels I have devoured this trilogy. Im on my second reading of vol 1 and vol 2. I cant get enough of Edward and Lily. and you have left me longing for more. As a love story put on hold for the duration of the war for the greater cause if winning the war. I can your scientific side coming uin with the vast scope of all the campaigns and challenges of the blitz, the V1 and V2 rocket attacjs, as well as the indomitable spirit of the English people. Truly The Greatest Generation. My family was part of this as well. I was 12 days old when Pearl Harbor was bombed. My Father served as a paratrooper in the Pacific and my uncle gave his life at Leyte Gulf.
I remember my confusion re Edward and Lily in the Epilogue 1980 reunion as the book seemed to end with Lily and Greg. Nine Stood taller the Final year revealed so beautifully the rest of Lily's story

Brilliant from start to finish . Unstoppable read even with dodgy eyes! Cannot wait to start the autumn series.

I am an avid reader of historical fiction of the world wars. It is clear that Peter Turnham was a dedicated researcher for this book and the one before it, both with the same title, except this one was "The Final Year". It was unputdownable, and I forced myself to read only a couple of chapters at a time so I could savour the entire story slowly. It is blessed with complex characters who are well developed as the story unwinds. It is a book that will have you experience a variety of emotions - joy, triumph, sadness, and depression among many. Ultimately, it really helps the reader understand vicariously how the United Kingdom and its people lived through horrific times and emerged victorious.  Enjoy every page - I envy you!

A Wonderful Read -  I quickly became involved with the characters; amazing insight into the fears and tragedies of WW2. An education into the intricacies of how the war progressed, and was won, and amazing depiction of characters, their lives, relationships, vital roles in a secret world of strategy, strong women, bravery, fortitude. Makes me proud of the British.

A brilliant novel I really liked this novel. The principal characters were attractive personalities and I would have loved to have met them in person. The whole book is heart warming and the dialogue is most authentic and frequently extremely funny. The plot holds the attention throughout and I was delighted with the ending. I will certainly want to read the author's other novels